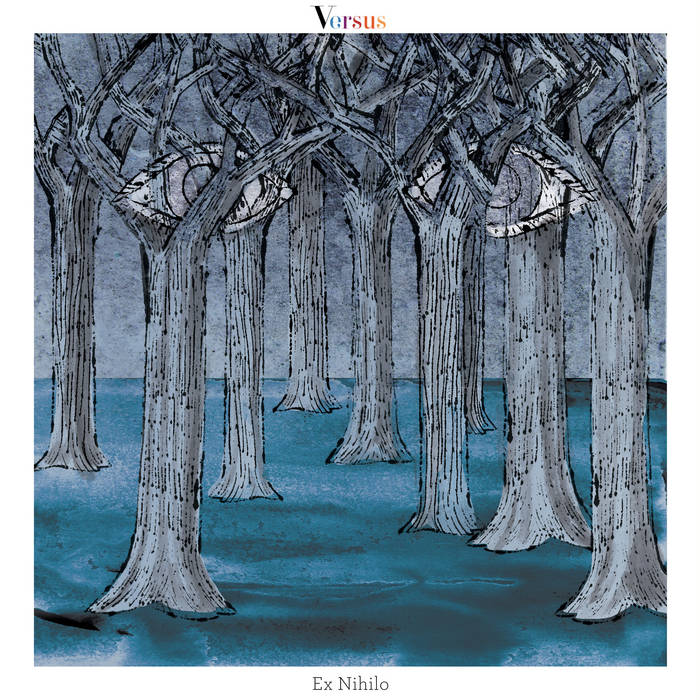 sean I missed the harmonies. Thanks for bringing them back!

yogagirl88 As always, Versus plays the edge between dark and moody subject matter and upbeat melodies with great hooks and vocal harmonies. Versus understands dynamics better than your average band. "Between the Hemispheres" features a spectacular crescendo, moving from fairy-tale-lullaby to a full-throttle siren's song and leaving you gasping for air by the end. Favorite track: Between The Hemispheres.

jeffgluck Why do I love this album?

It’s been a steep slope for the Extended Play record, the wicked stepchild of music formats. Physical EPs had become anachronisms, bygone symbols of the halcyon indie years of the ‘80s and ‘90s, but the pendulum has begun to swing back in recent times, with fine EPs released by Belle and Sebastian, Lesser Evil, Public Practice and Protomartyr. Now 2019 delivers the superb EP Ex Nihilo by Versus, one of the downright epochal bands of the urbane grime of the ‘90s indie rock scene. It’s both a return to form and format, as the band has a long history of companion pieces to their seminal albums, EPs that were full-on artistic triumphs, often becoming even more beloved by their fans.

Their first was 1993’s Let’s Electrify!, which made an appearance in the Village Voice Pazz & Jop’s Top 10, an unexpected accolade and honor for a debut release. Let’s Electrify! was Versus’ entry into their own rarefied stratosphere, a mission statement of artistic purpose — slashing, melodic guitar figures, leavened by the band’s greatest strength, the gorgeous yin/yang co-lead vocals of Richard Baluyut and Fontaine Toups, seamlessly complementing one another’s idiosyncratic vocal styles, rolling over each other like flood waters. Versus continued the tradition and trajectory with Deep Red (Teen Beat) in 1996, and the fan favorite Afterglow EP (Merge) in 1999.

Now, twenty years since Afterglow, and nearly ten since their last release, 2010’s On the Ones and Threes, Versus have added to their sublime EP legacy, releasing another masterpiece in Ex Nihilo, an exposition on divinity and creation, literally meaning “out of nothing.” Opener “Invisible Love” is a brisk swagger careening toward catastrophe — a relationship breaking down amid accusations of perfidy, as Baluyut questions God acerbically, “Where’d you hide your invisible love?” Versus always were a band that excavated painful intimacies, and they’re still fixated on the elusive, ineluctable nature of love, and how cruelly it can be taken away in a world where individuals control so little. In “Bow and Arrow,” Toups steps to the fore in spectacular fashion, a call to action for women of all ages to overthrow their #metoo oppressors, “can’t reverse the curse carryin’ a purse” as she retains her trademark ability to pointedly incriminate, “you missed your shot.” “Gravity (Version)” is a doomsday sepulchral, as Baluyut questions, “What is left behind when the spirit’s gone?” Off-kilter rhythmic slabs and choppy guitar discomfit, as if fighting to ward off the inevitable truth that life is cosmic purgatory, one where we’re “bored of sleep and dream of death.” Yes, Versus is still nihilistic. Time inexorably moves, love fades away, but tonight could well be the night. “Between the Hemispheres,” the EP’s closer, offers sweet resignation, as Baluyut sings, “you’re the fairest of them all, but I didn’t say it enough, I couldn’t find the words,” before Toups’ guardian angel assures him, “all you want is love.” In Versus’ latest act, clothed in science fiction and existential dilemma, redemption in this brave new world can be found in the sweetness of love. They may sneer cynically, but also care deeply.

So EPs can still astonish in 2019! And Versus? This EP precedes future cryptic work to be announced, and what does this mean for the public’s interest in a band that was, according to Sam Fogarino of Interpol, “all everyone talked about in 1997.” Are there second acts in 21st century dystopic dreams? We’ll find out as more is revealed. But for now, let’s revel in this sensational band’s return. Blast this EP, and realize Versus never really went away — we just stopped asking them, and that’s on us. But we can certainly expect a blinding album, expanding on the sci-fi concepts subtly hinted at on Ex Nihilo, an interesting progression for a band that once dwelled in “failed apartments” (Two Cents Plus Tax ‘s “Dumb Fun”). Life gets bigger, like it or not. These are terrifying times, but Versus have matured and address gravitas with dignity. They once joked of being the “sports, rock, and meat” band, but now they embrace spirituality, compassion, and exploration. Versus have never sounded so comfortable with their strange, beautiful, and uncertain path. They’ve always traveled in the shadows of the heart and beyond, so expect more “out of nothing” in the future.